What we spent on Christmas this year- 2019 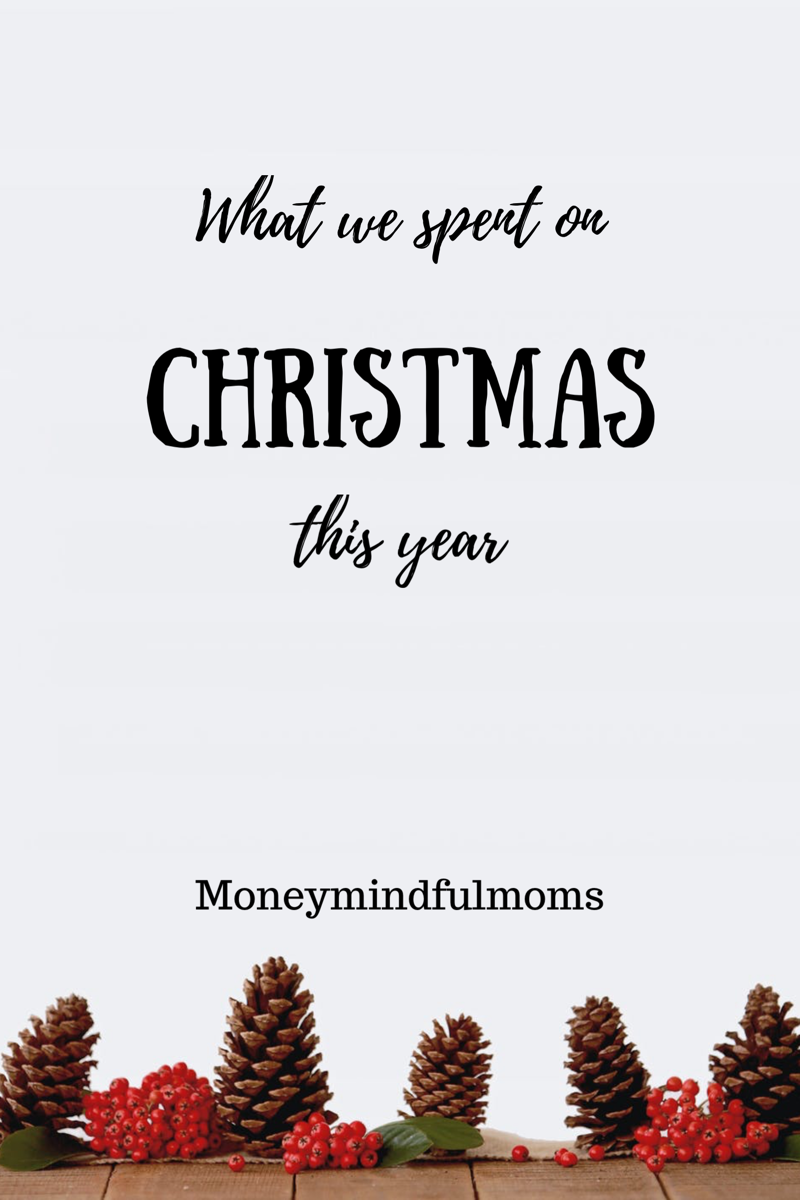 Another trip around the sun has us back in the magicalness that is the Christmas season. This year has been extra fun because my son is at the perfect age to start understanding more and is full on immersed in the magic of Santa and his elf on the shelf. He’s been wrapping and unwrapping random things around the house and rearranging ornaments on the tree since we put it up.

Speaking of magic, we had to work some magic with our Christmas budget again this year. 🙂 While we could have put in some overtime to make more money for Christmas, I was perfectly happy with the budget we had of $400 and would rather put extra money towards our other goals anyways. Take a look to see if we stuck to our budget!

Here’s the breakdown of what we got and what we spent:

We didn’t get anything for each other this year. Don’t feel sorry for us though! Neither one of us has a love language of gifts and I’m pretty sure in the 11 years we’ve been married we’ve never gotten a Christmas gift for each other. We’d just rather put that money somewhere else so it works for us!

My parents love playing games and I saw this one was a great deal on Amazon and would be a great one for them to play with the kids when they come over to visit.

We are going to my parents for Christmas Eve this year so we didn’t want to show up empty handed. We aren’t traveling to visit my in laws this year so we’re holding off on a gift for now and will get something small when we visit. I know they’d rather we save our money.

We don’t exchange gifts with our siblings. It’s just a mutual understanding that we would rather everyone just do something for the kids and save their money instead of getting us a gift.

This year we needed gifts for 3 teachers, 2 principals, a teacher’s aide and 3 secretaries.

Being married to a teacher I know that gift cards are a favorite for teachers so for the teachers and principals I did a combination of a gift card to our favorite local coffee shop, and a Mary Kay product like a hand cream or lip balm (I get them at wholesale so it saves money) wrapped up in a cute mug or mason jar.

For the teacher’s aide and secretaries I just got them a lip balm wrapped up cute with a tag that says “you’re the balm.” I just wanted to give them something to let them know they weren’t forgotten without breaking the bank.

We have 2 nephews and 3 nieces to buy for and as much as we’d love to spoil them with all the things, they’re all so young that it made sense to keep it low key this year. We did books, and my niece got a ride on scooter when we were able to get it for an amazing deal on Black Friday.

We have great friends that always spoil our kids for Christmas and Birthdays so we don’t want to forget them at Christmas. They’re taking a Disney cruise this year so we got them a $25 Disney gift card they can use on the cruise.

We have a tradition that every year on Christmas Eve the kids get to open a special gift that contains new Christmas pajamas and a new ornament I picked out for each of them. I also include a couple of packets of hot cocoa and a new Christmas book to read to them and then we watch a Christmas movie afterwards.

For their ornaments I find great deals every year at Hobby Lobby. I usually try to pick one out that reflects their interests for that year and they have the best selection and they’re always 50% off.

Ok here we go, the one’s that take up most of my budget, and, quite frankly, my time and energy trying to pick out what to get them this holiday season. My daughter is at the age where she’s starting to ask for pricier things. This year she asked for a Nintendo Switch. We decided not to go that route because we’re not ready to open up the box of video games (I already have a hard enough time limiting tv time so I’m not signing up for something else) plus it was expensive so we are getting her a lot of things we know she will enjoy even if she didn’t specifically ask for them.

I actually bought these from someone on Facebook marketplace second hand. I saw she was selling both of them together for $25 and new they’re about that much per book and these were like new. Farrah’s just now jumping on the Harry Potter bandwagon and I thought these would be great read alouds for me to read to her since they’re illustrated.

We decided to get the kids new scooters this year since they were both getting a little too big for the ones they have now. We were able to get a great deal on Cyber Monday for some razor scooters. Our daughter’s was on sale for only $18!

I really don’t like getting my kids more stuff but I don’t mind more books or games. I loved this one when I was a kid and I don’t think my kids have played it yet so I got it when it was on a great sale.

My daughter is getting the age where accessories can no longer be sparkly, princessy, unicornish kind of things so I thought I’d get her a grown up purse that she’ll actually use when we go somewhere and she wants to bring her stuff.

Let’s be real I’m really just tired of holding her stuff when we go somewhere.

This one looked cute and was much cheaper then the ones we saw at Claire’s. We got it in black but it comes in lots of different colors

Another game from my childhood that kept me busy for hours so hopefully it will for her too. 🙂

I shared this one on my instagram stories when I found it at TJ Maxx because I didn’t know FAO Schwartz had such great toys at a great price. At the time on Amazon it was significantly more than at TJ Maxx but it looks like the price has come down quite a bit on Amazon now if you can’t find it at TJ Maxx.

For her stocking I included a pack of underwear, a paperback book I got on clearance at the book fair, a jewelry set I earned for free from my work that I thought she would like and some scrunchies.

My son was more difficult to buy for. He’s been obsessed with dinosaurs for 3 years now so he has pretty much every dinosaur there ever was and yet that’s all he asks for. I can’t bring myself to buy him another dinosaur so I had to get creative.

Hopefully he loves the board game as much as he loves everything else Jurassic World! I got this one at Ross for only $10.

Just like we did for his sister we upgraded his scooter while it was on a big sale.

Another clearance book fair find that I snagged and held onto for Christmas.

I was wandering around Target trying to find something else for him and I found these. They were already at a discounted price of $8.50 but they were buy one get one free so I got both for that price. He’s not huge on Ninja Turtles quite yet but he knows his dad used to love them when he was little and he asks about them sometimes so I’m hoping he’ll be ready to start playing with action figures instead of just dinosaurs.

I’ve been wanting to get these for him for a while now but they’re pretty expensive typically but I was able to get this set on an Amazon lightning deal for only $28.50.

I found this one at Ross and am also hoping he likes this enough to play with it instead of his dinosaurs. If you see me selling this in 6 weeks on facebook marketplace, you know the answer.

He’s been asking so many geography questions lately I though this would be a good idea so I could actually show him instead of describing to him where places are. I got mine from TJ Maxx and I couldn’t find the exact one on Amazon but I linked the closest one I could find.

His stocking consisted of so much play doh, so much slime, dinosaur underwear and dinosaur stickers.

Alright so, ummm, we went over budget. I probably could have done one less gift per kid and left out the gifts for the school secretaries and principals but I didn’t want to leave anyone out so I was willing to spend more than our original budget. I still think we did pretty good getting the most bang for our buck!

Here’s wishing you and your family a very frugal and Merry Christmas!